In the month of August, we will like to highlight two very important events that are celebrated to celebrate humans around the world:

The International Day of the World’s Indigenous Peoples is observed on 9 August each year to raise awareness and protect the rights of the world’s indigenous population. This event also recognizes the achievements and contributions that indigenous people make to improve world issues such as environmental protection. 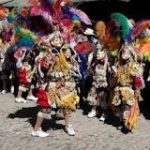 The U.N. General Assembly created International Day of the World’s Indigenous People on December 23, 1994. August 9 was chosen as it was the day of the first meeting held by the U.N. Working Group on Indigenous Populations of the Sub-Commission on the Promotion and Protection of Human Rights.

However, despite the crucial role indigenous women play in their communities as breadwinners, caretakers, knowledge keepers, leaders, and human rights defenders, they often suffer from intersecting levels of discrimination on the basis of gender, class, and ethnicity and socioeconomic status.

Indigenous women particularly suffer high levels of poverty; low levels of education and illiteracy; limitations in access to health, basic sanitation, credit, and employment; limited participation in political life; and domestic and sexual violence. Besides, their right to self-determination, self-governance and control of resources and ancestral lands have been violated over centuries.

Small but significant progress has been made by indigenous women in decision-making processes in some communities, achieving leadership in communal and national roles, and standing on the protest frontlines to defend their lands and the planet’s decreasing biodiversity. The reality, however, remains that indigenous women are widely under-represented, disproportionately negatively affected by decisions made on their behalf, and are too frequently the victims of multiple expressions of discrimination and violence.

World Humanitarian Day on August 19 honors humanitarian aid workers all over the world.  Established by the UN in 2009, this day commemorates the anniversary of the bombing of the United Nations headquarters in Iraq. 22 people lost their lives, including the UN’s High Commissioner for Human Rights.

Humanitarian aid workers provide life-saving assistance to suffering people all over the world. Those workers who live in conflict zones or in areas devastated by natural disasters are especially vulnerable. Anyone and everyone can be a humanitarian, so read on to learn more about the day and how you can help.

The day pays tribute to the thousands of humanitarian workers who gave their lives and suffered injuries in the course of their work. Did you know that at one point in 2021, 235 million people in 26 countries required humanitarian assistance? This is the day to honor all those workers who continue their service to provide support and protection to people in need. On one occasion of this holiday, people celebrated with the theme ‘Human Race’. This holiday is a commemoration, but it can also be exciting and fun!